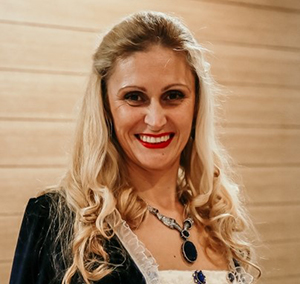 Vesna Aćimović was born in 1978 in Sombor. She graduated solo singing in 2002 at the Academy of Arts in Novi Sad, in the class of prof. MM Vera Kovač Vitkai. Interpreting the role of Musetta from Puccini’s La Boheme, Vesna Aćimović gained her master’s degree in the class of prof. Milica Stojadinović.  She completed her doctoral studies at the Department of Singing at the Academy of Arts in 2019, where she defended her doctoral artistic project entitled “Aspects of interpreting Peter Konjović’s vocal writing in the Lirika cycle” and thus obtained the title DOCTOR OF ARTS.

During her education she has won numerous awards and accolades. As an elected representative of the Academy of Arts, she attended the Prague-Wien-Budapest International School in Baden, where she successfully sang concerts throughout Austria. In the same year, she was selected as one of two representatives of her country to take part in a meeting of young talents of the world in Pyong Yang. In 2002, Vesna Aćimović was the finalist of the International Competition for Young Opera Singers in Maribor. She attended Opera Studio of the Serbian National Theater in 2003 and 2004, where she perfected her vocal technique with baritone Nikola Mitić. She was a scholarship recipient of Melanija Bugarinović Fund. In 2014 she was an active participant in the masterclass held by tenor Marcello Bedoni.

Since 2001, Vesna Aćimović sang numerous roles in operas and operettas by Mozart, Donizetti, Verdi, Rossini, Strauss, Stojanović and other composers in the Serbian National Theater. As a member of the “Visoko C” Association of Artists, she participated in numerous performances of operas written for children. She has sung over 400 performances throughout Serbia. With “The Chamber Music Society” she sang numerous roles in operettas. In Bitef Theater in Belgrade she has sung La voix humaine by Francis Poulenc and in Dorćol Platz the leading female role in Udo Zimmermann’s opera Weisse Rose. She has also performed number of concerts in Serbia and abroad (Hungary, Germany, Austria, Italy, Slovenia, Montenegro). She participated in festivals such as “Ars vivendi clavicembalum”, Kotor Art, SOMUS, NOLEF, Mermer i zvuci.

In October 2016, she published a manual for students of solo singing and music pedagogy “The Power of Vocal Technique”.