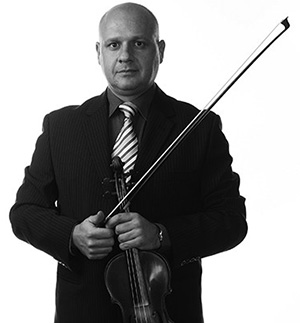 Florijan Balaž, the violinist, was born in 1971 in Novi Sad, where he completed his primary and secondary music school. He studied in Novi Sad and Ljubljana, then spent a year specializing in Vienna. He finished the postgraduate studies at the Academy of Arts in Novi Sad, in professor Uros Pesic’s class.

He currently holds a position of Full professor at the Academy of Arts in Novi Sad (subject violin), simultanously acting a s a Head of Department for Strings. He has won numerous awards and accolades the most significant of which are: the first place at the Federal Competition in the Violin Category in 1986, first place at the Federal Chamber Music Competition in the Piano Trio Category and the first place award at the International “Petar Konjovic” Competition in the Piano Duo Category in 1996.  For the achievements achievements in studying and music work, he received the highest recognition of the city of Novi Sad, “The Maturity Award” in 1988. He represented Yugoslavia as a member of the Mediterrain Youth Orchestra in the XN Provence – France in 1989 and successfully passed the concert-master audition for the Youth Orchestra “Gustav Mahler”, which was conducted by the famous Caludio Abado for years. In the season 1992 – 1993 he was a member of the “Ciudad orchestra de Malaga” orchestra in Spain. Since 1993 until the end of 1995, he was a regular member of the Symphonic Orchestra in San Galen and a concert-master of the Chamber Orchestra of Gosau, both in Switzerland.

He is the founder and concert-master of the “Novi Sad Soloists” Chamber Orchestra. In the season 2004 – 2005 once again he was engaged by the San Galen Symphonic Orchestra. During his time in Switzerland, Florijan Balaz performed at the concerts of the Europian String Orchestra.

In April 2004, he recorded his first independent sololist CD, playing Fritz Crysler pieces. As one of the most outstanding artist of the younger generation, he got the honour to be the representative of Vojvodina at the International meeting of the Danube countries in Ulm – Germany, June 2004. Beside the classical repertoire, Florijan Balaz also actively promotes pieces of modern composers. Some of these projects are permanently recorded on CD: the “Ritual nova” ensemble for new music and the Neorenaissance “V.I.T.R.I.O.L.” ensemble. As a soloist, he performed throughout the former Yugoslavia and at the music centres of Switzerland, Austria, Germany, Italy, Spain, France, Hungary and Slovenia. Florijan Balaz has been the concert-master of the Symphonic orchestra of Vojvodina since its foundation, and performed with it as a soloist in 2013.