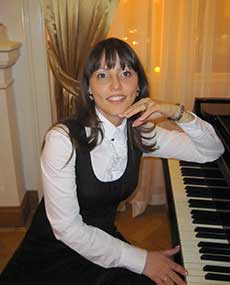 Mr. Marta Balaž was born in 1977 in Novi Sad. She completed her secondary education at “Isidor Bajic” Music school in Milica Stojadinovic’s class, then continued her studies at the Faculty of Musical Arts in Belgrade in professor Radmila Bakocevic’s class. She continued perfecting her concert singing skills during her postgraduate studies the Faculty of Musical Arts, Belgrade in Radmila Bakocevic’s class, where she completed the first year. After the completion of the second study year at the Academy of Arts in Banja Luka in Radmila Smiljanic’s class, she was awarded the “Master of solo singing – concert performance” title.

Her artistic repertoire comprises of a wide range of epochs, from the early Renaissance, masses, cantatas, oratories to the cycle of solo songs, while puting particular emphasis on popularising Serbian solo songs. Therefore, some of the modern Serbian composers dedicated their compositions just to her and her voice. She concerted throughout and beyond Serbia. Some of the concerts are recorded and permanently kept in the archives of RTS and RTV television. As a soloist she performed with: the Chamber Symphonists of Vojvodina, the chamber orchestra “Soloists of Novi Sad”, the chamber orchestra of Novi Sad, the chamber orchestra “Artisti del Arco” and the Chamber-symphonic orchestra “Zenici”. She is a regular member of the Neo-Renaissance ensemble “VITRIOL”, with which she had many concerts and recorded four CDs.

From the school year 2000 up untill now she has been successfully working as a professor of solo singing at the Music school “Isidor Bajic” in Novi Sad. Her students won numerous awards at both the inland and inetrnational competitions and festivals and are currently funded by the “Melanija Bugarinovic and Mirjana Kalinovic-Kalin’s daughters” fund, Novi Sad, dedicated to the vocal art advancement of the young. Some of the students continued their schooling abroad. She won the autonomous province government “Award” for the achieved pedagogical results. She worked as a music associate on the realization of Dostojevski’s play “Uncle’s dream” in the Serbian National Theatre, Novi Sad. She participated as a member of the jury at the Republic solo singers competition in Belgrade. She is the founder of the “FloriArt” Association of Citizens, which successfully implemented a great number of cultural and educational programs for young artists. She’s the initiator, creator and implementor of the solo singers competition in Novi Sad. The competition was named after the renowned Primadona and professor Vera Kovac Vitkai, ad it has been successfully held for the fifth year in a row.