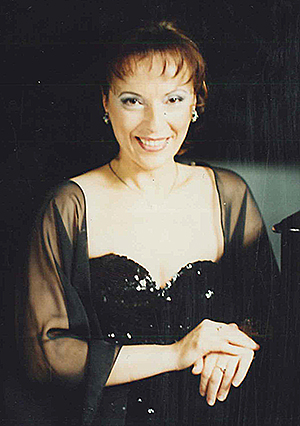 Marija Muratovska Naumovska is a Macedonian piano player and soprano solo singer with international career. She started to play piano when she was 6 years old. She had graduated piano and solo singing on the Faculty of Music Arts in Skopje. During her studies, she won a lot of awards and acknowledgments for her work. She is the first master in solo singing in this faculty. As a graduate she won first place on the competition for solo singers in Belgrade in 1982. She got an award for best student in the University “St. Cyril and Methodius” in Skopje in 1977. She is a winner on international competition for solo singers “Tomce Grncarovski” which took place as a part of the festival “May Opera Evenings” in Skopje 1976.

From 1978 to 1997 she has worked as a répétiteur – art coworker at the Faculty of Music Arts in Skopje. Beside the work with students, also she collaborated with famous music artists as а as a piano accompaniment to recitals in the country and abroad. At the same time, she started making her own career as a solo singer, sometimes accompanying piano on her own recitals. She actively participated in master classes of Staford Wing, Terry Rhodes (USA), Sophie Boulin (France), Arturo Sergi (Germany), Octav Enigerescu (Romania) etc.

From 1997 until today she works at the Faculty of Music Arts in Skopje as regular academic professor on bachelor, master and doctoral studies in courses such Solo Singing, Vocal Technique and Chamber Music. From 2001 to 2006 she performed the function Dean of the department for solo singing, brass and percussion instruments. Her students have won a lot of awards on national and international competitions in Solo Singing, also employed as soloists in Macedonian Opera and Ballet, or they have international career.

She made her debut with the opera role of Neda in “Pagliacci”, then as Mikaela in “Carmen”, Eurydice in “Orpheus”, Adina in “L’elisie d’amore’.

As a soloist she took part in performance of  Symphony No. 9 of Beethoven,” Illuminations” – B.Britten, ”Stabat Mater”-G,Rossini, ”Requiem” – W.A.Mozart, ”Symphony No. 2 – G.Mahler, ”Stabat Mater” – G.B.Pergolesi and other vocally instrumental works of World Music Literature.

From the Alliance of Macedonian Composers ,Marija Muratovska Naumovska has won the highest prize for interpretation of musical works from Macedonian composers, which brings the name of the doyenne of Macedonian Fulfillment  “Georgi Bozikov” (1996).

She is honorable member of the foundation “Zografski”.

The Alliance of Music Artists of Macedonia awarded her with the highests prize „Golden lira” for lifetime achievement.