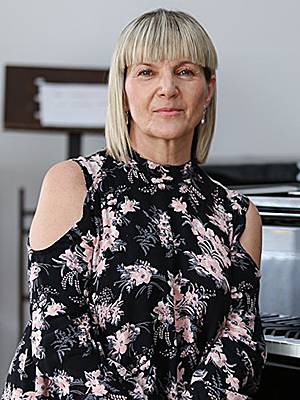 Since 1987, she has been working at the Franjo Kuhač Music School in Osijek, where, through her many years of teaching, she has raised and educated numerous young singers, who have continued their singing education in Croatia and around the world. Today, they are winning prizes at Croatian and international competitions and are recognized artists on the Croatian and international scene. They are: Marko Špehar, Krešimir Stražanac, Robert Adamček, Martin Marić, Alen Ruško, Gorana Biondić-Ruško, Goran Cah, Kristina Owais, Stefani Findrik, Jelena Gerendaj, Leonarda Kavedžić and Fabijan Trbara.

From 1995 to 2001, she worked at the Music Department of the Faculty of Philosophy in Osijek, on the Basics of Vocal Technique course. In the 2005/2006 season. she performed duty as director of the HNK Osijek opera. Since 1994, she has been a long-term member of the judging panel at regional, national and international competitions for solo singing, choirs and ensembles, and a member of the curriculum proposal team. Since 2020, she has been a member of the music jury for the awarding of the Judita award, which is awarded by Slobodna Dalmacija, and under patronage of the Ministry of Culture and Media and the President of the Republic of Croatia at the Split Summer festival. At international competitions in Novi Sad and Skopje, she is a member of the jury and holds masterclasses. She collaborates with well-known Croatian choirs from Šibenik, Split, Pula, Zagreb, Vinkovci, Osijek, Valpovo, with whom she worked on vocal technique and interpretation. She holds vocal workshops from different genres of music and for artists of different profiles.

Since 2008, she has been a member of the Croatian Society of Music Artists. She performs a number of concerts in Croatia and abroad – Spain, Germany, Austria, Czech Republic, Macedonia, Serbia, Bosnia and Herzegovina. Especially cherishes Croatian solo songs and baroque music. She often performs with famous Croatian organists – Ante Knešaurek, Mario Perestegi and Mario Penzar. For her pedagogical achievements, she was awarded the Annual Award of the Croatian Association of Music and Dance Educators in 1999 and the Oscar of Knowledge award from the Agency for Education in 2011. She obtained the title of professor mentor in 2011, and since 2016 has been in the title of professor advisor. For the school year 2018/2019. she received an award for the 510 most successful educators in the Republic of Croatia. In addition to artistic and pedagogical involvement, she is also very active in the organization of the cultural life of the environment in which she lives and outside of it, as well as in humanitarian work.